Norwii Presenter is a software which has Windows version and macOS version.

Wireless presenter is a physical device which has page down/up keys and a USB receiver.

There are two ways to download and install Norwii Presenter software： 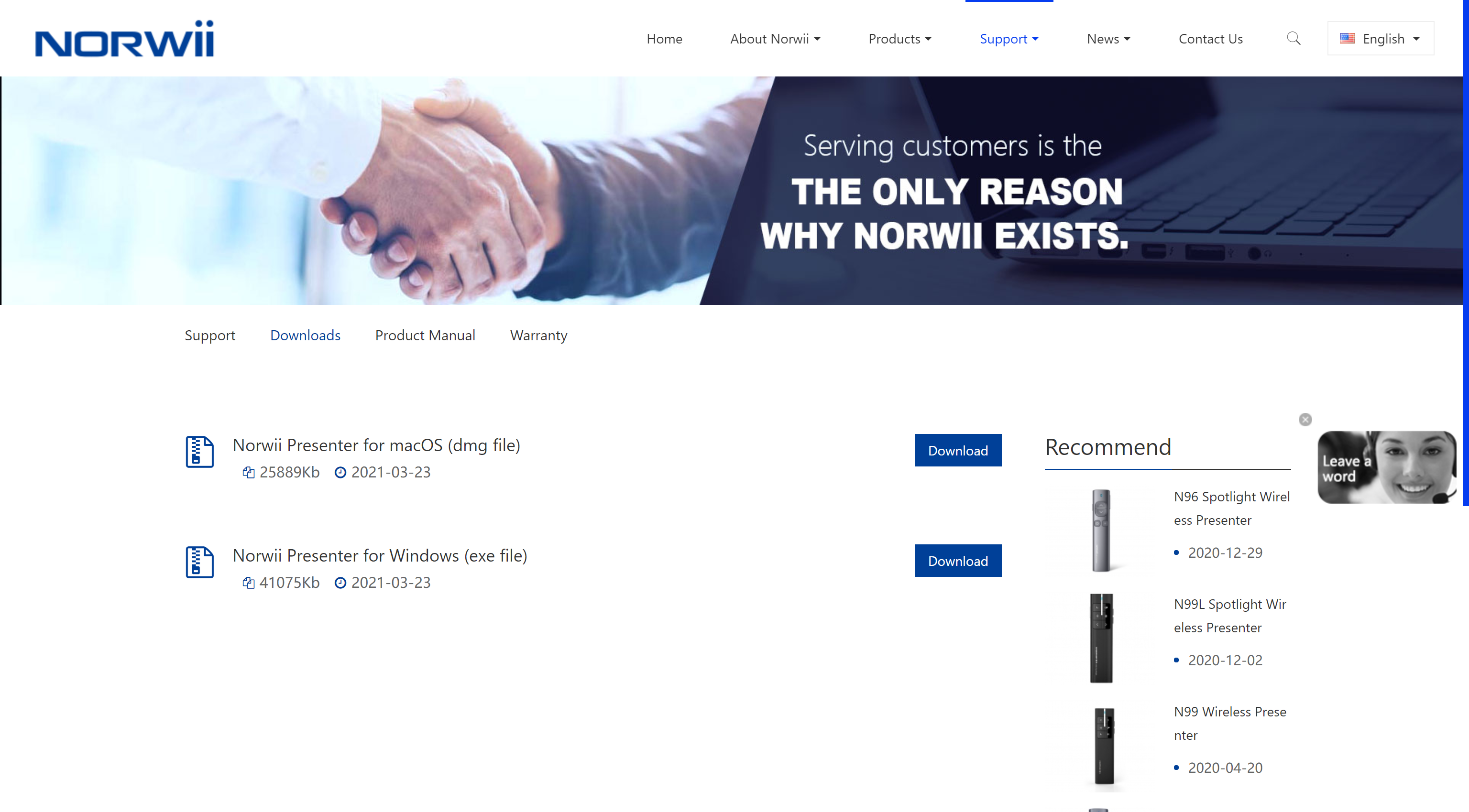 After the first startup, the system will create shortcuts on the desktop and the start menu. Next time, you can click the shortcut to start.

2、Insert the USB receiver into the USB port of your computer and Windows will automatically prompt to download and install the Norwii Presenter software. But this way doesn’t work from version 20H2 of Windows 10 for OS restrictions. 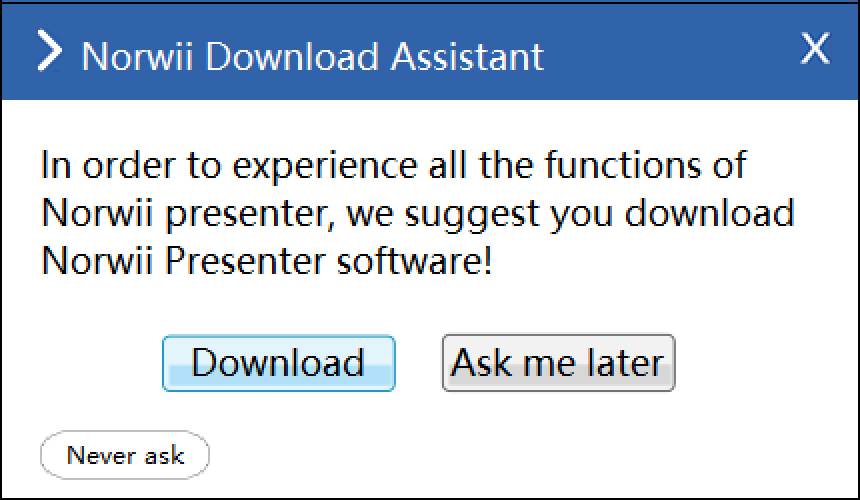 This software is used together with Norwii wireless presenter device. It can provide intelligent and customized functions to help you control the speech more confidently, attract the audience and achieve a good effect of the speech successfully.

After inserting the USB receiver, the function menu is displayed as follows:

Brief introduction of the function menu:

2、 Customize: You can customize the key of the wireless presenter to other functions according to your own requirements.

4、 Sharing: Share a file or URL through the QR code.

6、 About: Including version information, update link and contact information.

Device status: The status of the USB receiver will appear at the bottom left of the software.

It indicates that there is no USB receiver inserted or detected.

It indicates that the USB receiver and wireless presenter connected, you can use it.

The software supports multiple receivers at the same time, but some conflicting functions will be temporarily suspended.

3、 Clear screen: Clear the contents of the data frame. 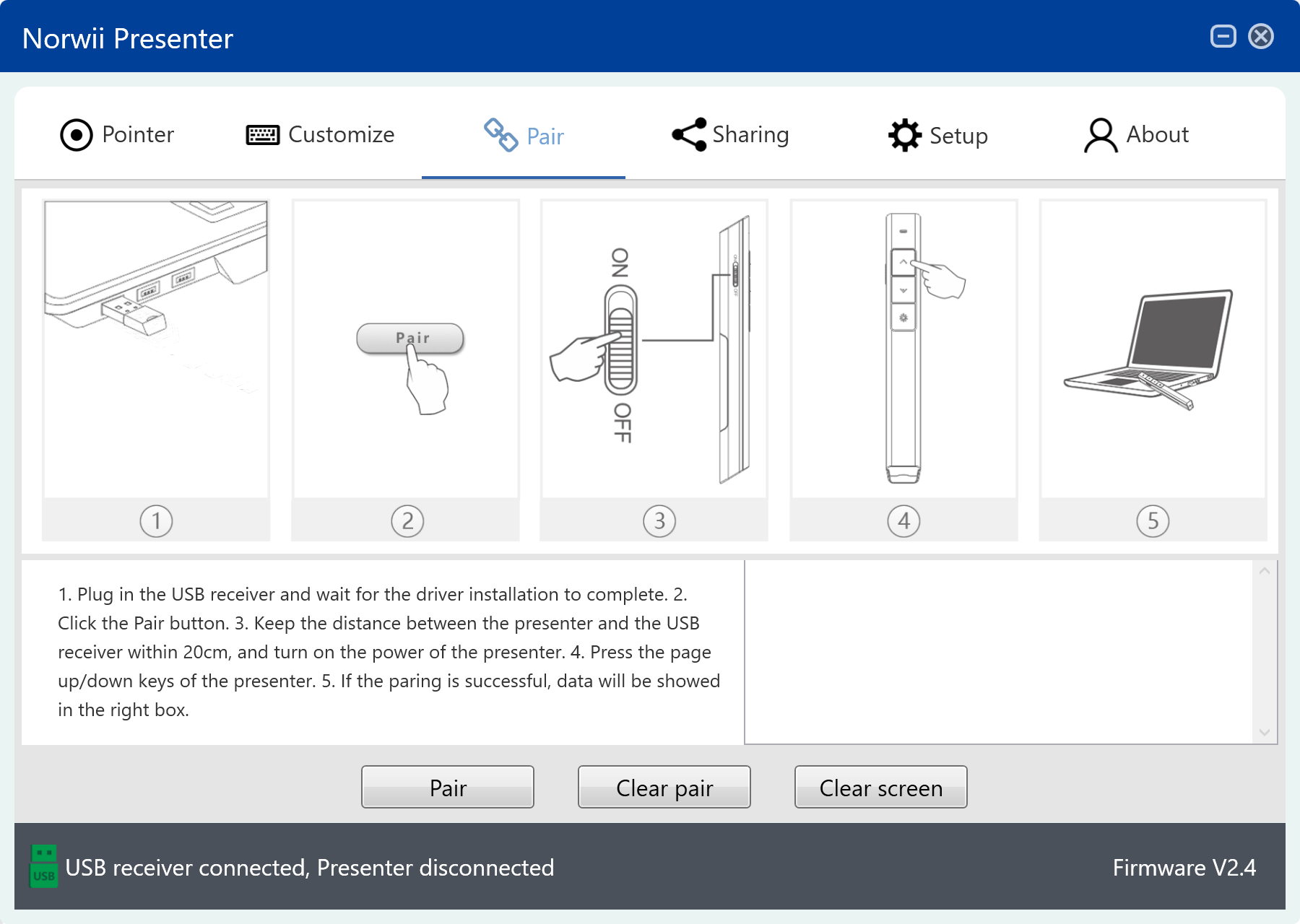 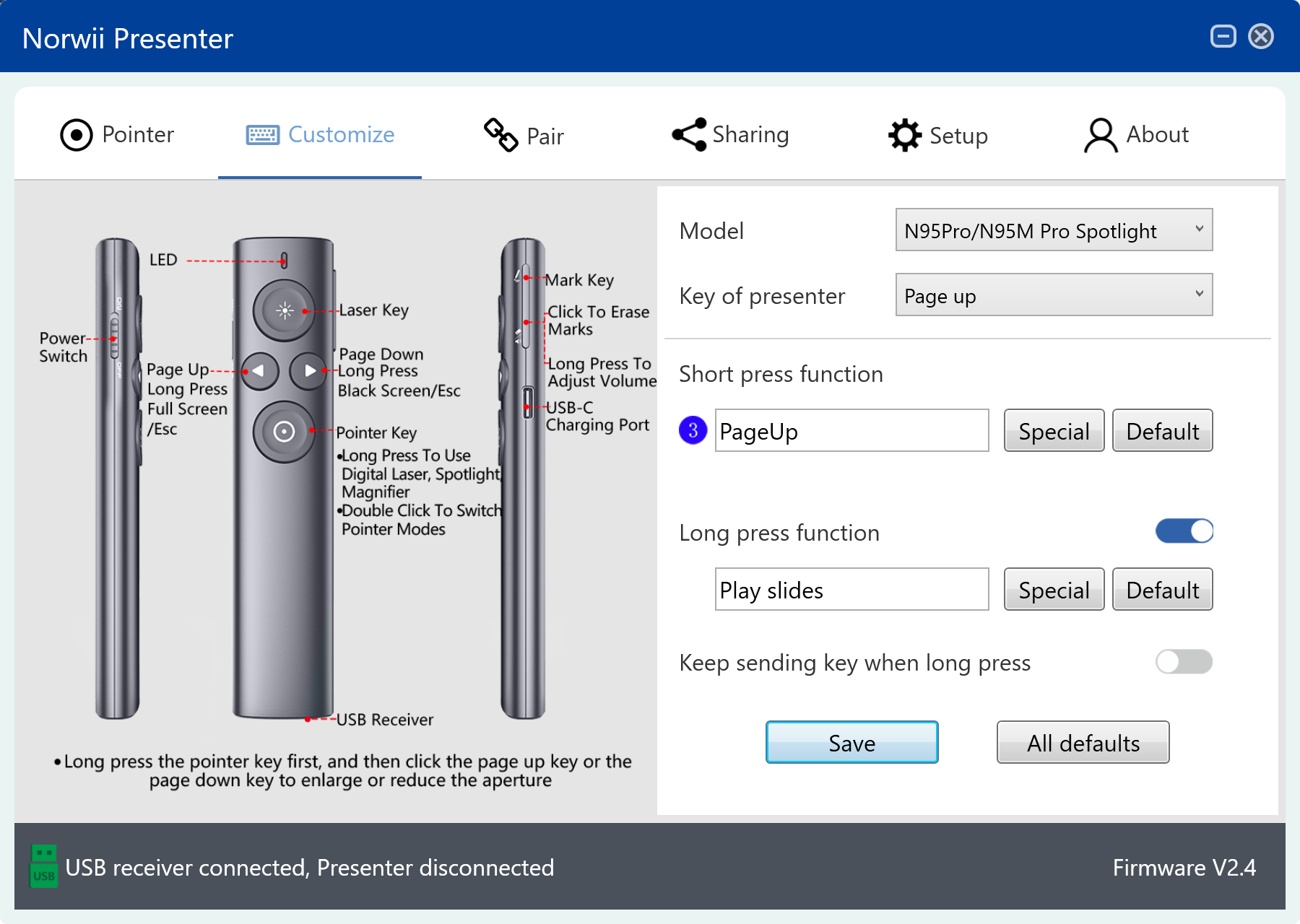 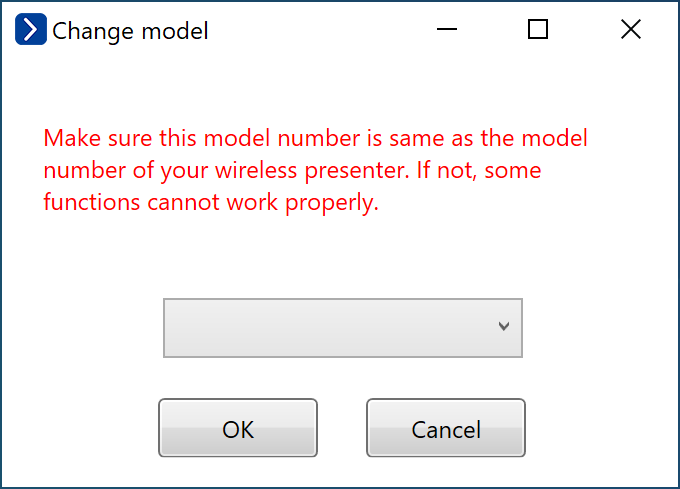 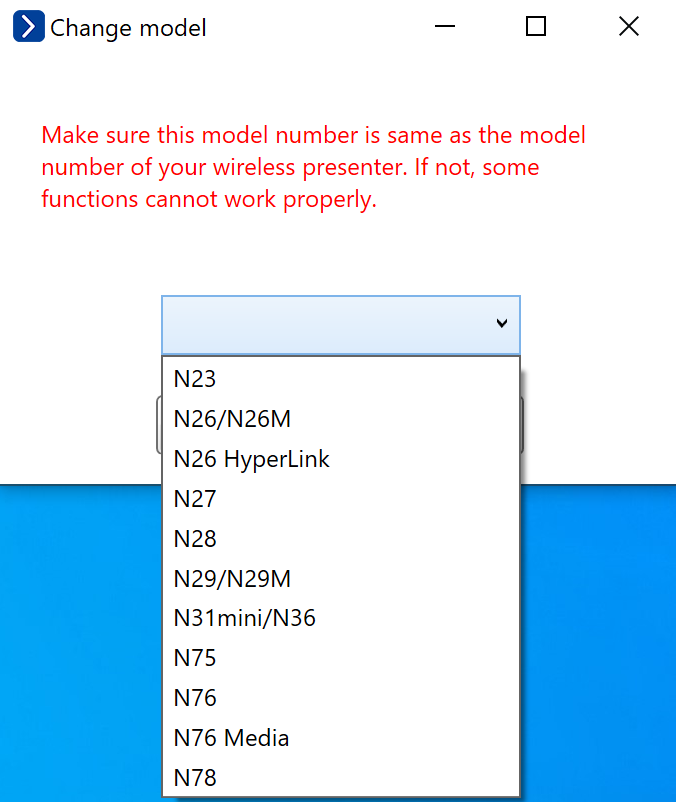 4. Long press function: The setting of the long press function is basically the same as the short press. "Keep sending Key when long press" is a switch. When the switch is turned on and the button is pressed for a long time without releasing, the wireless presenter will continuously send the key value to the computer. This is set for special keys such as volume adjustment. If you set the page up key to increase the volume. When you long press the page up button and do not release it, you certainly want the volume to continue to increase to the maximum, rather than only increase once.

When the switch is turned off, the wireless presenter only sends the key value to the computer once when the key is pressed for a long time without releasing. If you set the long press of a button to Black screen, and turn off this switch, in the full-screen PowerPoint playback state, when you press and send Black screen to the computer, the PowerPoint will enter a black screen. Of course, this key value is only sent once, as shown in the figure:

All your customizations take effect only after the Save button is clicked.

The user can modify these settings. After the USB receiver is inserted next time, the switch of each mode is subject to the user's settings. 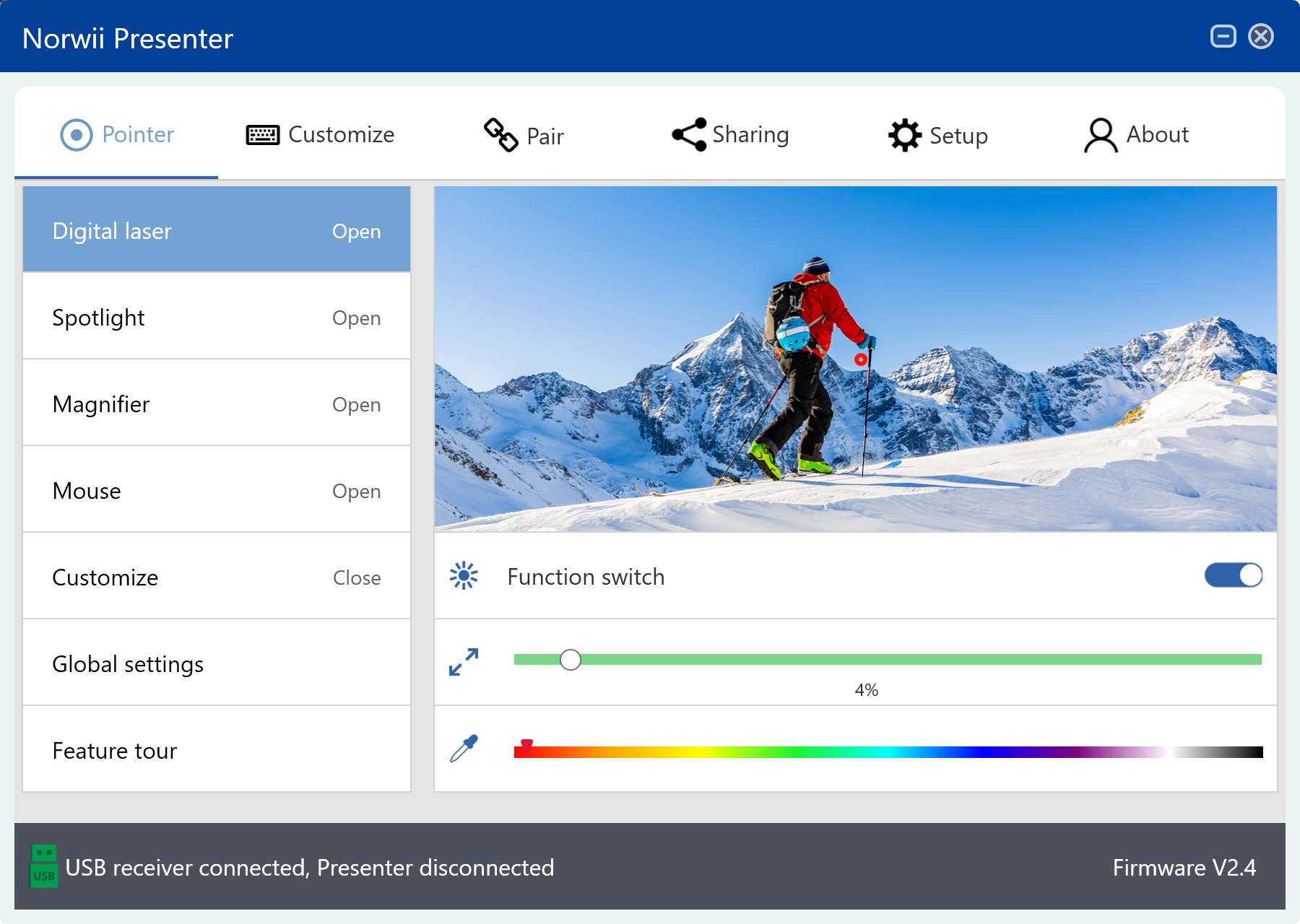 c) Press and hold the pointer key, and then click the up and down page keys to adjust the size of the icon in this mode.

The digital laser is to emulate physical laser that displays a solid point on the screen. The digital laser option interface has 3 functions that can be set. The function switch is used to turn the digital laser mode on and off. The following two options are used to adjust the size and color of the digital laser spot. If you enlarge this point to a certain degree, it will become a circle, as shown in the figure:

Use Spotlight to dim the background and focus on a part of your screen.

The function switch in this interface is used to turn this mode on and off. The following two options can adjust the size of the circle and the contrast inside and outside the circle, as shown in the figure: 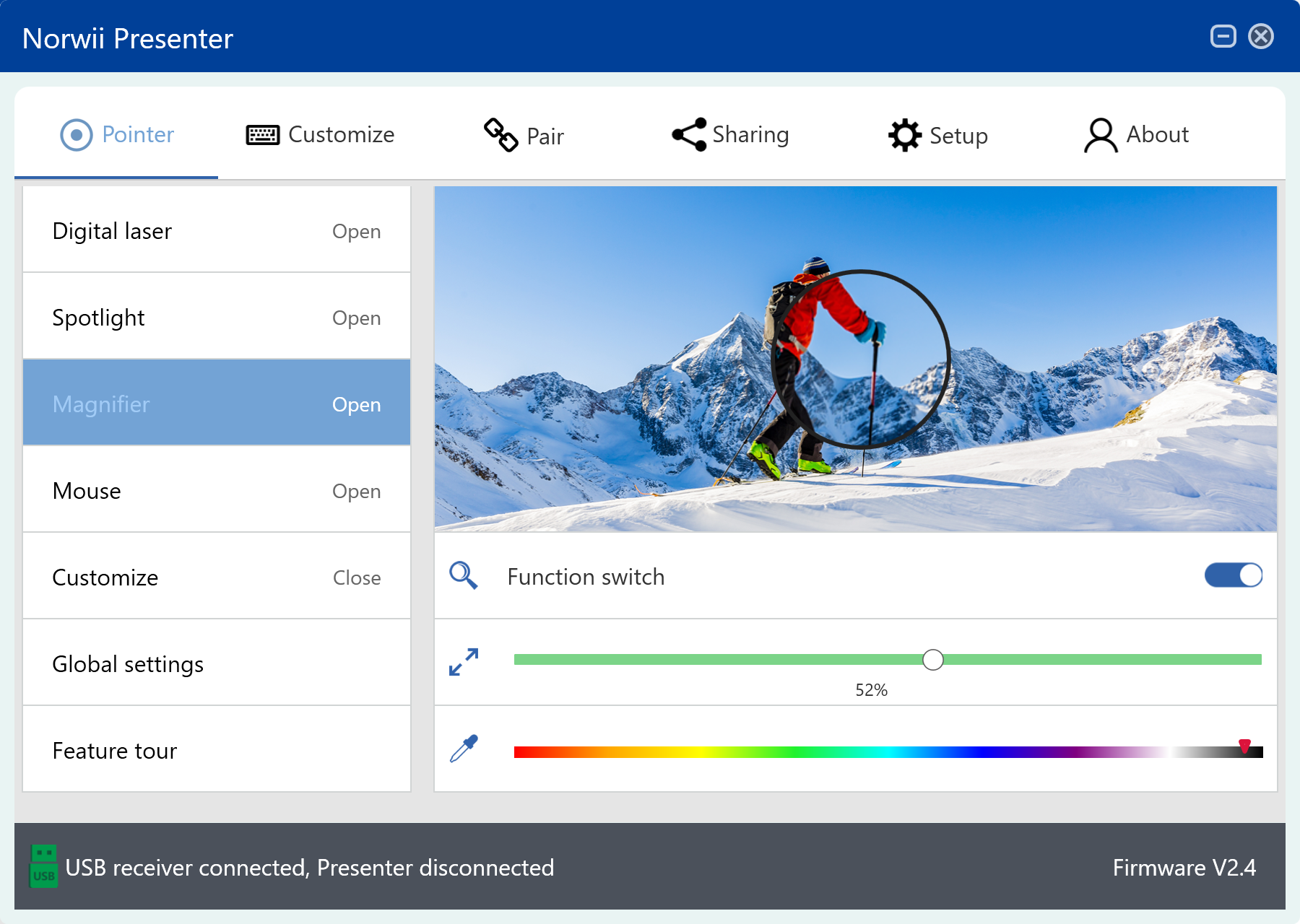 This tab has only one function switch, which is used to turn on and off the air mouse mode. When the air mouse is turned on, user can double click the digital laser key to switch to this mouse model. On this air mouse mode, the pointer key will function as mouse left button when the pointer key is clicked. User can use this mode to move the mouse and click to open the supper link on the slide or open Windows application. Only Some Spotlight products support this function. 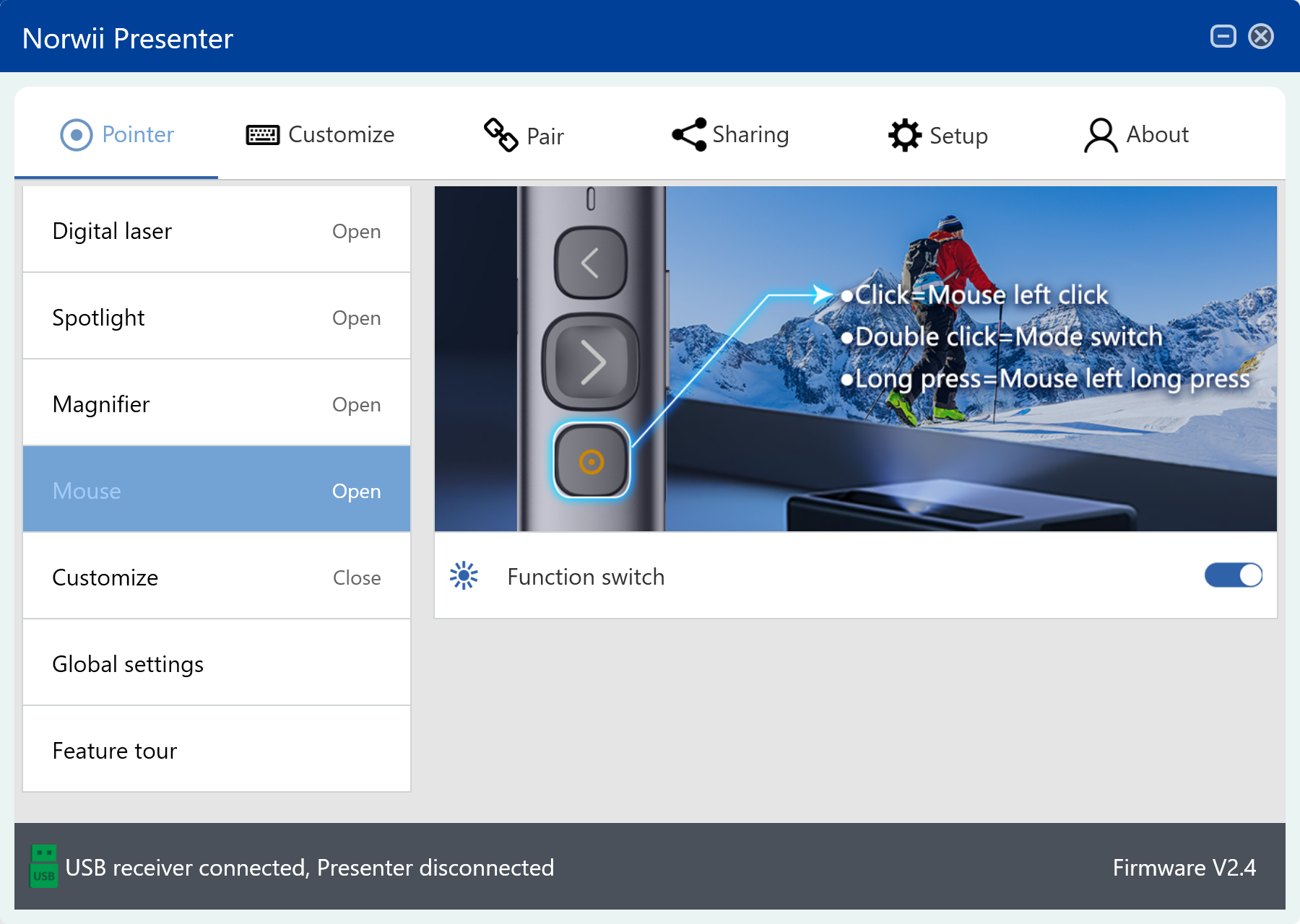 The customize mode allows the user to display a picture as an indicator icon on the screen. Open the customize icon function switch, you can import a picture. The software supports four picture formats such as png, bmp, jpg, gif, and you can set the size of the picture. 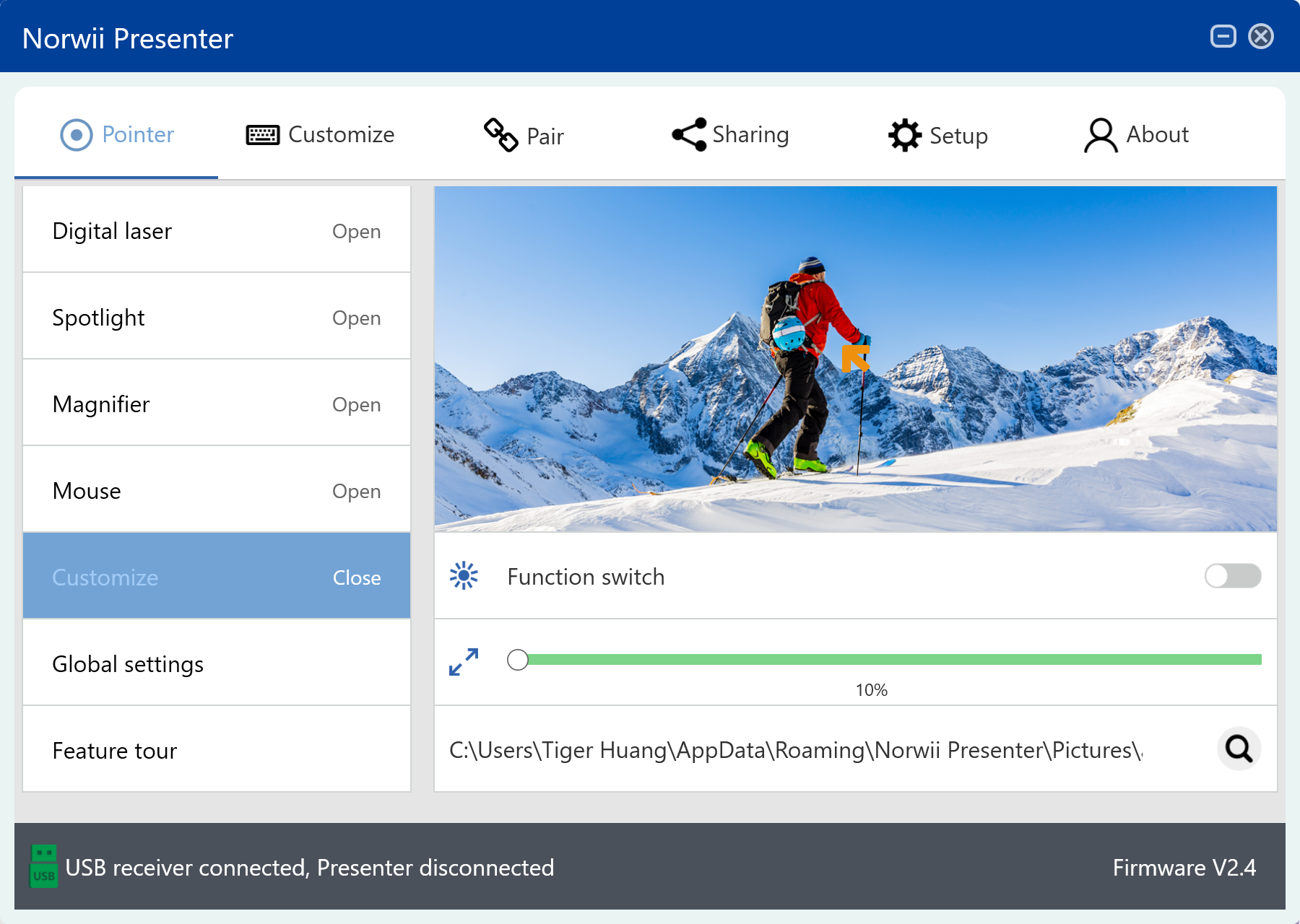 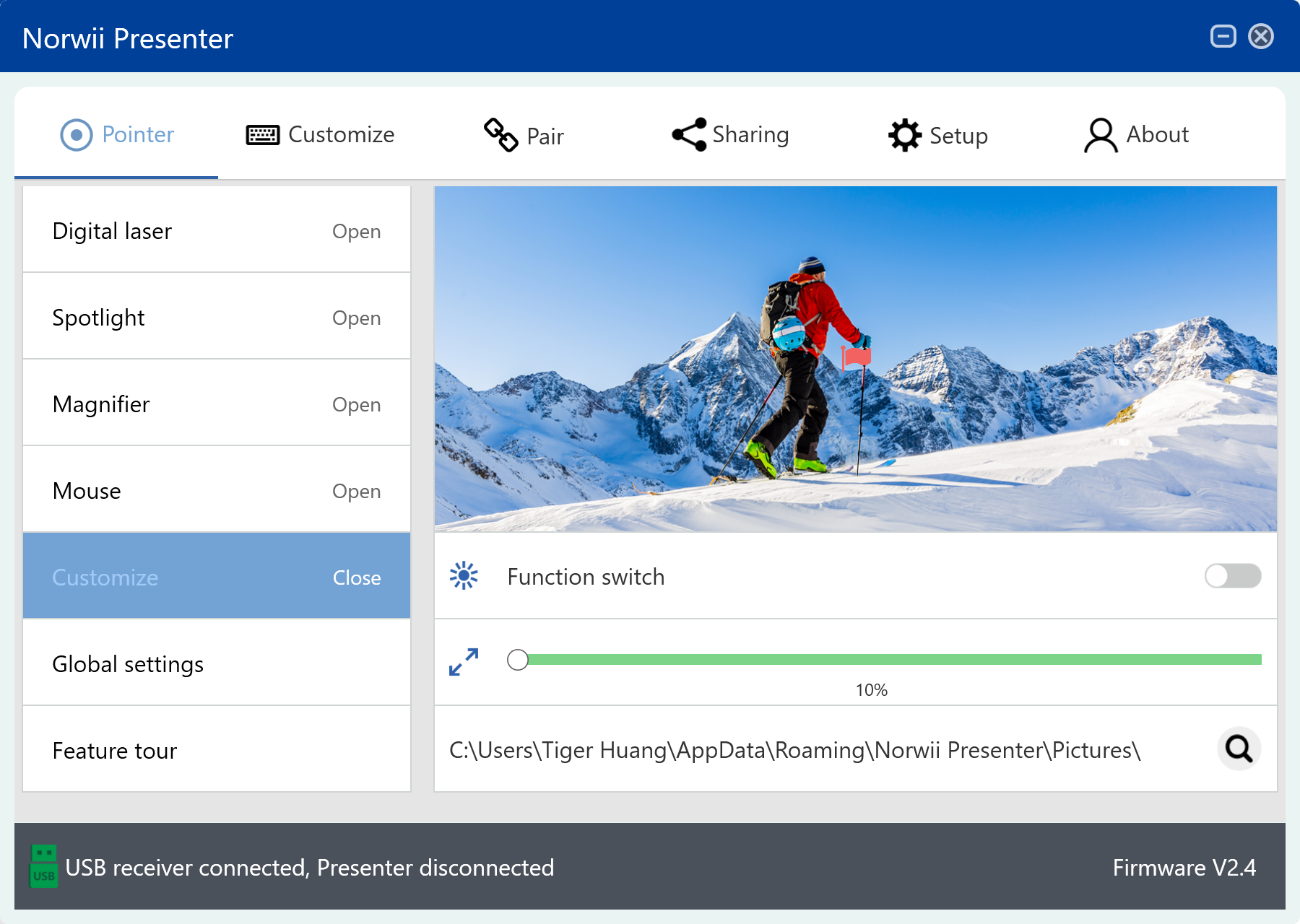 a) Display switching effect when double click pointer key: when double-click the pointer key, the screen will display the effect of pointer switching;

b) Pointer centered after page up/down: After turning the page, the pointer will automatically return to the center of the screen;

c) Retention effect after long press released: when it is turned on, for the digital laser, spotlight, magnifier, customize icon, the effects of the above modes will not disappear after the long-press of the digital laser key is released. The effects will remain on the screen until user press another key to disappear; When closed, the corresponding display effect will disappear immediately after releasing the long pressing of the pointer key;

e) Pointer speed: You can adjust the moving speed of various functions of the pointer.

After installing the software for the first time, spotlight's presenter will automatically pop up the feature tour according to the wireless presenter’s model. This function will guide users to operate the key of the presenter step by step and demonstrate the functions of the presenter, as shown in the figure: Click the local file upload button, and the system will pop up the file selection interface, as shown in Figure 25. The size of the uploaded file cannot exceed 50M. 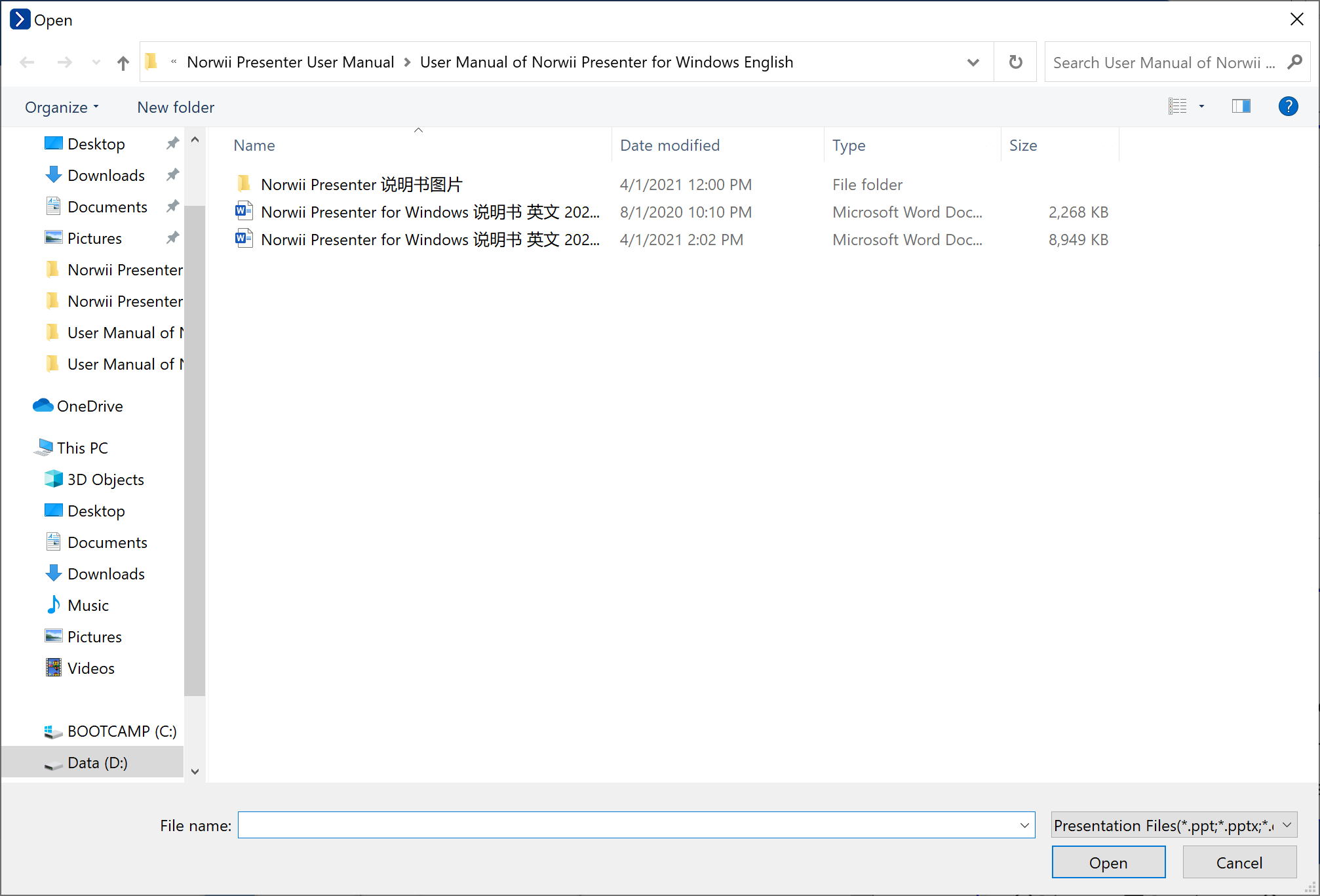 After selecting the shared local file, the system will upload it to the server and generate a QR code, as shown in Figure 26. Meeting participants can scan the QR code for downloading. The QR code is valid for 24 hours, and the server file will also be automatically deleted after it expires. 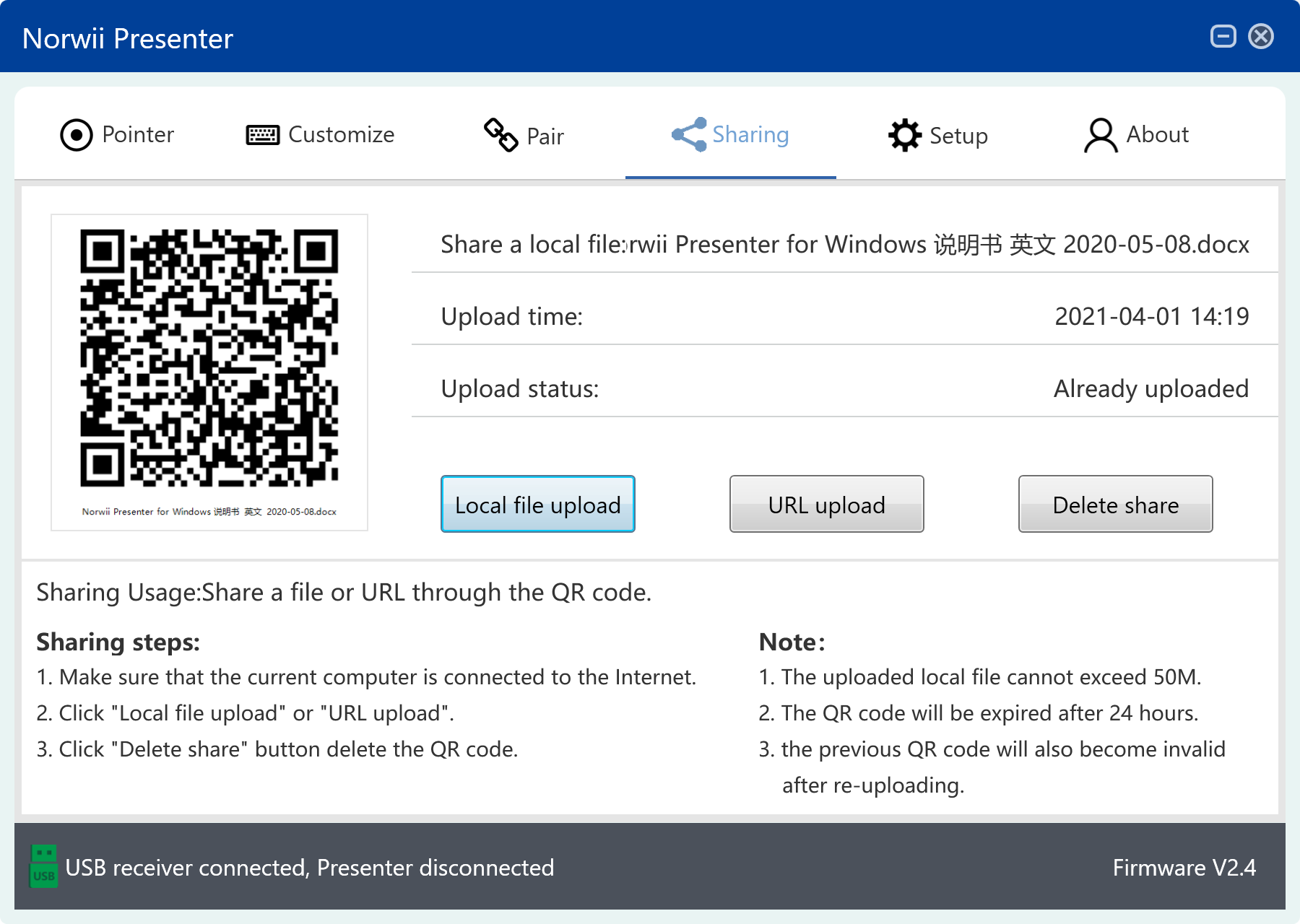 If the file to be shared is in the internet, click the URL upload button, input the corresponding URL and retrieve password, as shown in figure.

After filling in the URL information, a QR code will also be generated, as shown in Figure 28. Meeting participants can scan the QR code for downloading, and the QR code is valid for 24 hours. If the shared information needs to be deleted, click the Delete share button, and the corresponding files of the server will be automatically deleted.

1. General, as shown in the figure: d) Uninstall Norwii Presenter: The wireless presenter requires Norwii Presenter software to properly use the functions of the pointer keys. When uninstalling, all files and folders will be deleted and user settings will also be deleted by default. The downloaded installation files will not be deleted automatically and needs to be deleted manually.

2. Annotate keys, as shown in the figure: 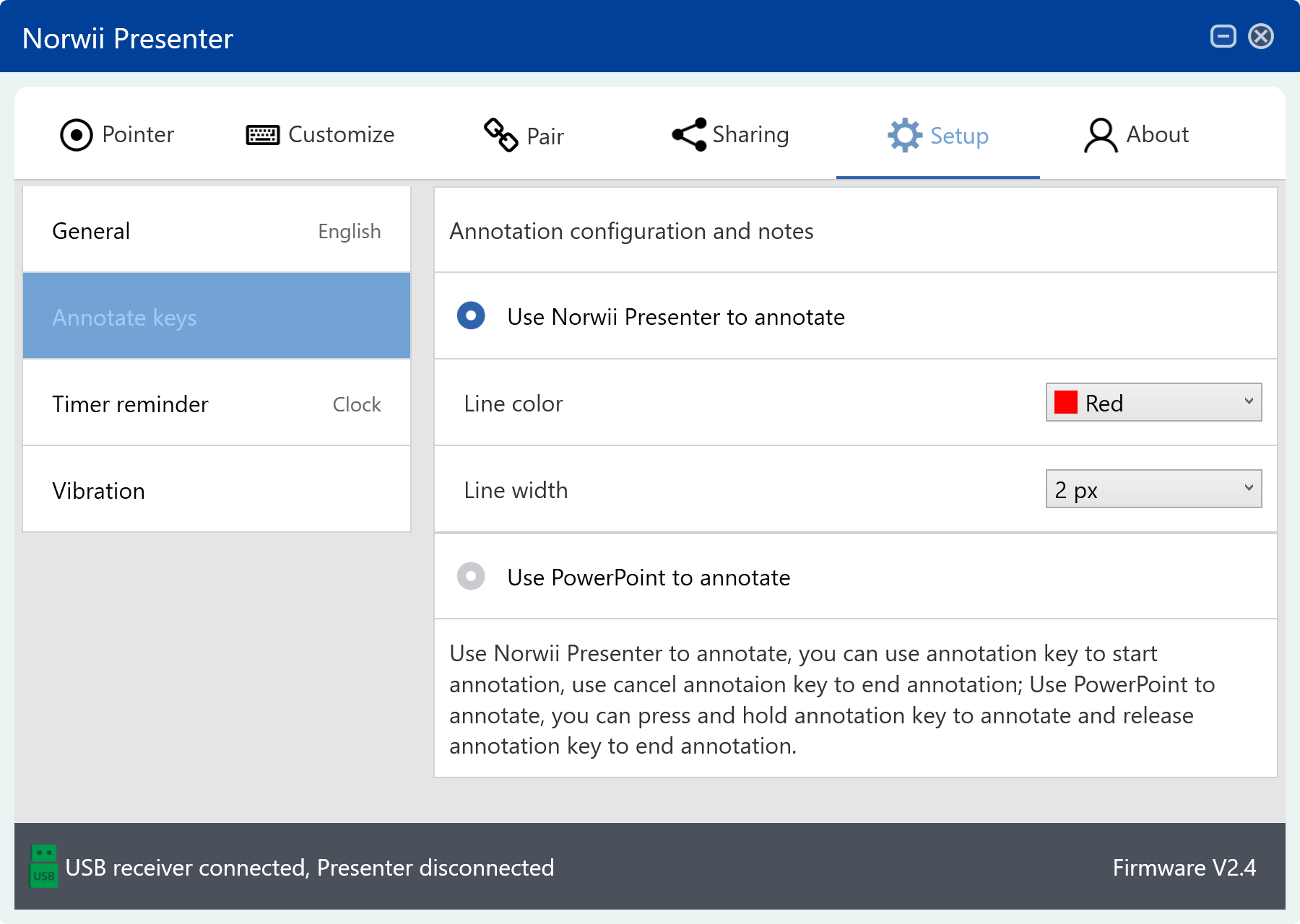 b) Line color: The color of the line contains 12 colors. Users can choose according to their requirement;

c) Line width: The color of the line includes five thicknesses from 1px to 5px. Users can choose according to their requirement. a) For example: When the timer is turned on for 30 minutes, the timer will be displayed. At the same time, the user can also reset the time and adjust the position and size, as shown in the figure: b) Customize: Set the time in minutes. If you only need 15 minutes to play the PowerPoint, please click Customize and enter the number 15.

The following three conditions must be met in order to display a timer or clock.

1. Plug in at least one USB receiver of a wireless presenter which supports spotlight function. The following is a presenter view of PowerPoint. 4. Vibration, as shown in the figure:

a) Battery reminder: when it is on, the wireless presenter will vibrate in case of low voltage or insufficient power; when it is off, this function is not available;

b) Presenter connected reminder: when it is on, every time the wireless presenter is connected with the USB receiver successfully, it will vibrate; when it is turned off, it has no such function;